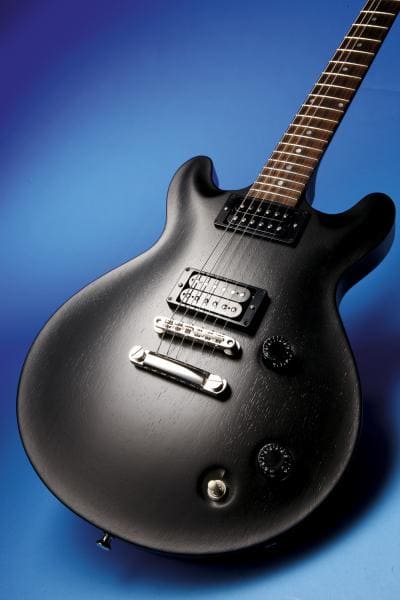 Suffolk-based Martyn Booth Standard, one of the best in the biz, offers his classic shape in myriad formats. Huw Price checks out the stripped-down, arched-front, all-rocking Standard

Some guitar shapes just look right from the outset, but timeless models are few and far between. When a designer nails that perfect outline, who can blame him for sticking with it for the rest of his career? Leo Fender did it, Paul Reed Smith still does it – and the UK’s Martyn Booth does it too.

Booth devised his signature shape in the late 1970s while he was employed by Gibson. When Yamaha offered him a job that combined repair work with an opportunity to design his own models, his elegantly downsized 335 shape was adapted for a solidbody known as the Yamaha MSG (or Image in the US).

Throughout the 1990s Booth ran his own repair workshop, returning to building guitars in 2001. He emphasises traditional materials and construction techniques while maintaining a custom order philosophy; customers can choose their own timbers, pickups, hardware, inlays and finishes.

However, more affordable stock models are becoming available in an increasing number of shops. Although these guitars are available at a lower price, the basic process is exactly the same as on the Custom models. Local craftsmen are contracted to carve the body and rough-cut the neck, and these parts are hand-assembled by Booth himself.

We featured a pair of custom-ordered Martyn Booths back in 2006; this stock StMartyn Booth Standardandard model is the all-mahogany version of the Booth Classic. The top of the one-piece body is carved into an elegant arch, with a rib rout at the back.

There are recesses for the knobs and switch and the cutaways allow effortless access to the highest frets. Martyn cuts and sets every neck joint using saws and chisels, with a vintage Gibson-style long tenon that extends most of the way into the neck pickup cavity; he also hand-carves every neck with a spokeshave and profiles the fingerboards using a radius block. He doesn’t even use a fret press, preferring to hammer them home in the traditional manner. I’d have to say that I’ve never seen a tidier fret installation.

The neck joint is just about invisible underneath the satin black finish. Satin cherry and faded cherry are the options, and the ultra-thin polyurethane is designed to age quickly for a ‘natural’ look. The finish is allowed to sink into the grain, so you can easily tell there’s mahogany underneath the black. The one-piece mahogany neck has an unbound East Indian rosewood fingerboard fitted with white pearl dots and narrow but tall Dunlop 6150 wire.

Martyn Booth StandardBooth’s customers often tend to be jazz and fusion players, but the Standard model was born with rock in mind. Pickups are a Seymour Duncan Custom at the bridge for a hotter vintage tone with a touch more low end, and a Duncan ’59 at the neck, voiced for a ’50s-style Gibson tone but wax-potted to keep things squeal-free. Both have four-conductor lead-out wires; the tone control is also a push/push switch that taps the pickups and works in conjunction with the three-way selector. The wiring is ultra-neat, and we appreciate the extra copper shielding on the underside of the cover.

Martyn’s preferred setup includes a flat, no-relief neck. The lovely, medium-depth C profile feels consistent from the nut to the body joint and the Standard has a fast, even playing feel that’s pretty much the same at the third and 13th fret. If you plMartyn Booth Standarday with a light touch it’s ideal. But heavy-handed players will hear quite a bit of fret buzz. This pretty much disappears once you’re plugged in. But I’m not entirely convinced that this slinky setup allows the guitar to resonate as freely as it could. With an all-mahogany guitar I would generally expect a livelier and more harmonically-loaded real star, with a phasey midrange and all the spikiness smoothed over.

Switching back to humbuckers and piling on the gain brings out the best in the Standard. Even through vintage amps this sounds like a modern rock guitar. And the bridge pickup combines extremely solid and tight lows, cutting treble and thick mids. The note separation is excellent from both units. And the neck pickup provides a more vocal tone with extra touch dynamics.

Like an SG the Standard is a touch neck-heavy, but it’s more direct, clearer and more aggressive. It would be ideal for a modern rock guitarist, and the coil tap makes it very versatile. Especially with a channel-switching amp. The Martyn Booth guitars we reviewed in 2006 felt like top-of-the-range hand-built guitars with near-flawless finishes, top-quality materials and a human’ feel. The Standard ticks the first two boxes, but it doesn’t feel the same. As some cosmetic corners have been cut to hit that lower price. Still, it’s hard to fault – and don’t forget, Martyn Booth can accommodate customer requests even with his stock’ models.