Have you ever lusted over the weapon-holding mascot, the dark red knobs, and the sleek rustic build of the Klon Centaur? Seeing that thing on the stage with David Gilmour or Jeff Beck was enough to give it hype for ages. If it weren’t for its ridiculously high price, the Klon would’ve gone places.

Luckily for you, J. Rockett made an exact clone of the Centaur, with a strikingly similar mascot topping it off. The J.Rockett Archer has identical controls, a smaller build, and a much lighter price tag. Let’s see if it’s worthy of being the successor to the throne! 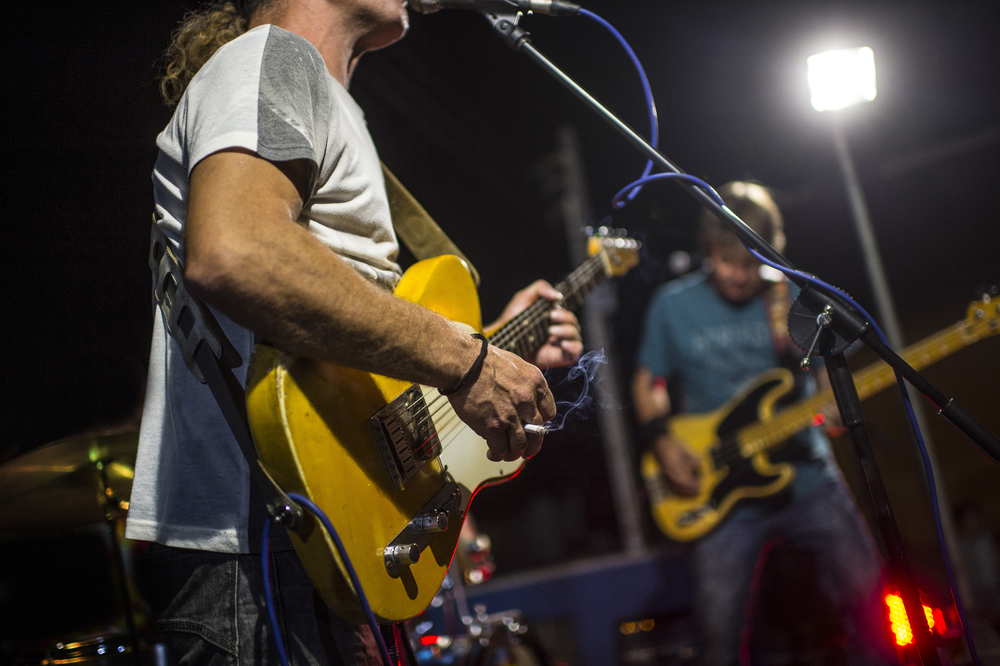 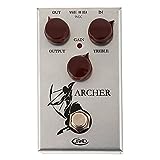 The J-Rockett Archer has a smaller build than the original Klon, making it a bit more convenient for gigs and trips. It comes in a solid steel box that’s bombproof, but hopefully, you won’t need to discover this feature.

All the input and output jacks are on the Archer’s front edge, including the standard 9V barrel jack. Meanwhile, the battery is hidden under a cover that you can easily remove by loosening the screws. Some users didn’t like this bit because it meant the process took more time. However, the screws are pretty easy to loosen and remove.

On the interior, the J.Rockett Archer isn’t precisely similar to the Klon Centaur. At least not like its front, which is a typical clone of the original pedal. That being said, the clipping diodes, the buffered circuit formal, and the charge pump are all there.

All the pedal’s components, including the pots, jacks, and adaptor socket, are mounted on the surface on a circuit board. Whilst the switch is mounted on its own board, making it easy to replace.

As for the Archer’s exterior, the controls are exactly the same as the Klon’s. The output, treble, and gain knobs can produce a multitude of sounds all the way from mid-gained to clean boost.

The Archer’s versatility is its strong suit and the reason why it’s been gaining a lot of market attention since its debut. You can use the small device as a clean boost, a low-gain overdrive, or a valve amp. You can also use it to boost other pedals when you need to. If that’s not versatile to you, then I don’t know what is!

You can get the Archer into mid-gain to achieve any rock or blues you need for your guitar. Additionally, the sounds get crunchier as you take the gain control past the halfway mark, which is one of the Archer’s remarkable abilities.

If you blend the clean boost and overdrive together, you’ll get an exciting spectrum of sounds. The clean boost alone is one of Archer’s best sounds; you’ll hear it as if the pedal was explicitly designed to produce it.

One of the best things about the J Rockett Archer is its sturdy metal chassis. You’re going to have to make an actual effort to get it scratched or get a dent on it. It’s made of high-quality components that are made to last. Not to mention that it has the same mascot that was on the Klon, which brings out faithful emotions for sentimental users.

Another thing to love about the Archer is how similar it is to the much more expensive Klon. The sound is too similar for you to notice any difference. If no one told you which pedal you’re hearing, you’d probably mistake it for the original king that made it to global fame.

Lastly, the Archer’s buffer is one of its features that customers love. The Klon was celebrated initially because of its unmatched buffer, and that’s where a lot of clones fell short. When using the Archer as a boost, you’ll be amazed by how similar the buffer is to the Centaur.

There aren’t many downsides to the J.Rockett Archer. It’d be hard to hate a device like this one. One of the things that the users didn’t like is the battery’s placement. Having to undo screws on a gig doesn’t seem convenient, does it? However, we can let that go, considering the pedal is loaded with useful features.

One more thing that could’ve been better is the battery life. The customers would’ve preferred a battery that stays longer.

Checking the J.Rockett Archer’s Amazon Reviews, you’d see that 81% of the users gave it a 5-star rating. Meanwhile, only 2% gave it one star. The considerable difference surely gets you thinking. Most users loved the clone, saying it’s the most accurate one on the market.

Some users compared it to the original Klon Centaur and found no difference in the sounds. Mind you; the external frame also looks the same!

For some reason, some users objected to the price, saying there were cheaper alternatives on the market. However, these alternatives wouldn’t even get close to the Archer’s sounds. Plus, when you take a look at the original Klon’s price, the Archer’s would seem pretty affordable to you.

People have been long searching for a device to fill the Klon’s gap. After the manufacturers decided they’d no longer issue the expensive pedal, a lot of brands jumped at the chance to make clones.

However, it all ended when J.Rockett decided to issue the Archer. The company decided to give other brands a run for their money, and it succeeded. Now, the Archer is considered the most accurate Centaur’s clone. If you want to get the same sounds you’d get from the 2000-dollar pedal, you should give it a go.