Fender super reverb is the smoldering musical gadget promoted by the famous blue hounds and the hard rockers. This amp is an embodiment of the elements exclusively used on the makers’ outstanding designs that ruled the sonic floor from the late ’50s to early ’60s. Its overdriven sound was lauded by many eminent players and guitarists.

What Is Fender Super Reverb?

The Fender Super Reverb is an accurate edition of the American classic – Fender ’65 Super Reverb. No matter if your guitar has a single-coil pickup or humbucking pickup, this 45-watt tube-driven guitar amplifier is a perfect match for genres such as country, blues, fusion, jazz, rock, and many more.

This amp has a precise power level for the size of the venue, ranging from small to midsize. It will be easy to convert its two 6L6 groove tube output tubes into a vintage distorted sound and stand against the onstage drummers.

This Fender Super Reverb is reissued as a tribute to the ’65 classic blackface circuitry. And, without any doubt, you can assume that this reissue produces the legendary sound waves that you probably would have heard in myriad classic hit records.

From the grand 45-watt with two 6L6 circuits to the luxurious spring reverb, beating vibrato, tilt-back legs, and Jensen speakers, the reissued Fender Super Reverb is the carbon copy of the ’65 classic, an authentic milestone in American Music.

History Of The ’65 Classic

The Fender Super Reverb is a guitar amplifier originally created by the American manufacturer, Fender. This product initially came to the market in 1963 and ended its reign in 1982. It was a super amplifier comprising deep-sealed reverb and tremolo (an effect that can modulate the volume of signal rhythmically).

The earliest super reverb was designed in the form of tubes and had a spring reverb. The design of this device was changed one time, giving two different amplifiers.

This beauty is popular among the blues guitarists then and now. It has a specific tonality called mid-scoop (also known as a smiley face curve). This audio signal processing is a curve typified by augmented low and high frequencies connected with shortened midrange frequency power.

Fender introduced a model called Super Six Reverb that comprises six Oxford 10L6 (or CTS 10″ AlNiCo) speakers with 10″/5.2 ohms (8 ohms each in series-parallel circuit) and 100 watts RMS (converted to 135W in 1977). It was a twin reverb that produced a master volume. This silver-face combo amplifier came to the market in 1972 and ended in 1979.

Other blue guitarists like J. Geils and Anson Funderburg used the Super Reverb. When people entered the 90s, seeing someone playing the blues with a Super Reverb became cliché. Predicting it would happen, Fender ceased the production of Super Reverb in 1982.

Blue Hounds is a band that offers its crowd a funky, upbeat, high-intensity electric blue sound with the mood of the music created in the ’60s. This band became famous by some prominent blue giants such as Albert King, Otis Rush, Albert Collins, Freddie King, Jr. Wells, Lucky Peterson, Little Milton, and B.B. King.

The Super Reverb produced high-intensity music without any interruptions or interference. In addition, it produced loud, warm tube distortion via its four 10″ speakers. With those advanced gigs, the Blue Hounds became an international band performing worldwide.

Now that we have covered the basics of the Fender Super Reverb, let us focus on the product development and customer reviews mentioned on Amazon. 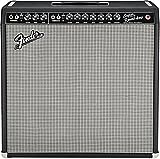 Like the old one, this reissued Fender Super Reverb has 45 watts of power compressing and overdriving the sound. It has four 10″ 8-ohm Jensen P-10R speakers to provide a crystal clear midrange punch. This Fender amp is tube-driven and has vibrato to offer spacious surroundings and a fabulous array of tones. It comes in a black color.

The amp works fine, but provides limited headroom. As a result, it will be loud but not clear. To avoid this issue, you can use it for public addressing only. It does not have any effects loop. Its 45 watts of power and four speakers can produce up to 95dB from each speaker.

Customers have rated the Super Reverb 4.5 out of 5 stars. They have suggested that it is a good product with versatility and produces magnificently clear sound if you have room and space for it. It does not bear any frills or unwanted modern features.

They also referred to its sparkly blue grits and blackface cosmetics as a pure classic. A person with vintage taste will definitely love this. All you need is severe distortion and delay pedals. This amp is suitable for pedals as well.

The Fender Super Reverb has earned its superior position through all the decades, working harder than other amps. It has become one of the few American Classics that still thrive in this modern world.

From its birth in 1963, the Super Reverb has contributed to various remarkable recordings, and it was an ideal option for smaller venues too. The legendary sound it makes will take you back to the days of the 60s.

Try using it at least once in your life because it’s an experience you don’t want to miss.